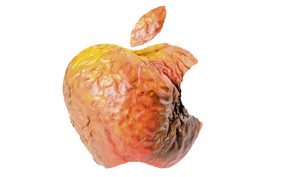 Behold a hilarious example of Big Business’ greed and hubris – not translating into actual inventing talent.

Today’s trillionaire oligarch business example – is Apple.  Which hasn’t really invented anything at all since its founder Steve Jobs prematurely passed away in 2011.

Apple Has Lost Its Way in the 10 Years Since Steve Jobs’ Death:

“When the iPhone launched, Apple truly had a five year lead in software development which it has since squandered. The most recent release of iOS 15 highlights just how iterative the operating system’s updates have become, but it goes beyond that.

“Apple no longer introduces new features that are truly different from the rest of the market. Most of the WWDC 2021 iOS 15 announcements were features that have existed on Android for years.

“Apple spent way too much time talking about widgets and continues to make design changes that move the iOS experience further and further away from the original user experience.”

Meanwhile, Apple relies heavily on actual innovators and their innovations – to paper over the fact that they haven’t innovated in years.

“Qualcomm is a leading American technology company that has led the way for numerous innovations for global wireless communications globally. Over 700 million devices use Qualcomm’s technologies.”

Amongst those 700 million devices, are many, many millions of Apple devices.  Your iPhone 14 is almost identical in every way to your iPhone 13 (and 12, and 11, and…).  Save for its improved ability to connect to the next, newest wireless network: Fifth Generation (5G).

And that connectivity – and the 5G network and its massively expanding availability and capacity – is due to the innovation and investment of a lot of companies.  Chief amongst them are Qualcomm and the wireless providers (AT&T, Verizon, etc).

Qualcomm : 10 Innovation Areas for 5G Advanced and Beyond

None of these 5G-responsible companies is Apple.  They are simply passengers on this locomotive – beneficiaries of the inventions and investments of others.

Yet at every turn, Apple strives mightily to not contribute even a little to the innovations and investments that make their multi-trillions possible.

Apple certainly isn’t helping the wireless companies with their investment into technological advancement and development.

Apple is even steadfastly opposed to contributing to government connectivity welfare programs – into which wireless companies are the predominant payers.

“Trade associations have again told the Federal Communications Commission not to pursue a possible a decision that may lead to big technology platforms contributing to the Universal Service Fund, according to a news report.

“The USF goes to support basic telecommunications in low-income and rural areas of America. The fund requires contributions from voice service providers, which have seen dwindling revenues as the agency seeks comments on how to improve the sustainability of the fund….

“‘INCOMPAS, CCIA, and DiMA believe it is time for the FCC to close this aspect of the proceeding so as to not waste any additional resources of the Commission or stakeholders,’ the report said.”

Apple is a member of both.

Apple steals the labor to make their stuff.

At Least 7 Apple Suppliers Are Using Slave Labor in China

And Apple steals the inventions that make their stuff possible.

“‘Apple Paid Up to $6 Billion to Settle with Qualcomm:

“‘Apple paid a high price to end a bitter legal battle that spanned multiple continents and threatened Apple’s ability to release a 5G iPhone and put pressure on Qualcomm’s licensing business model that contributes over half of the company’s profit.’

“All of this Apple-and-US-economy-threatening cataclysmic idiocy.

“This was SERIOUSLY short-term cheap – and long-term stupid.”

Not wanting to pay Qualcomm pennies-on-the-dollar – for the only thing innovative in their stuff?  Apple announced they would invent their own replacements for Qualcomm’s stuff.

“Apple is working on its own in-house cellular modem to replace Qualcomm chips in future devices….

“Apple’s Senior Vice President of Hardware Technologies Johny Srouji has reportedly held a town hall meeting with Apple employees to discuss the plans, which have been underway since the beginning of the year.”

Apple to Keep Qualcomm Chips in 2023 in Turnabout:

“Apple’s efforts have been stymied by prototype versions of the modems overheating….

“Qualcomm Inc. will continue to provide the modem chips for the ‘vast majority’ of iPhones in 2023….”

Apple still has PLENTY of greed and hubris.

Man Bites Dog: The EU Is Better Than…