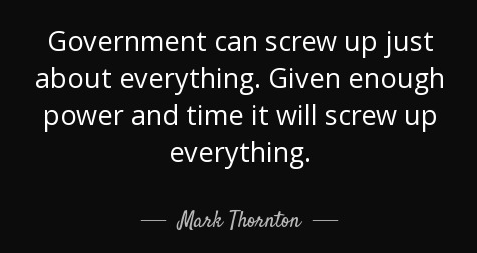 For over two centuries, the US’s patent system was the envy of the planet.  We had a relatively simple application and approval process.  Which drew massive interest and investment from inventors and their patrons the world over – over and over again.  Because the people inventing – and investing in inventing?  Knew they could protect – and profit from – their creations.

This moral and monetary certainty made the US economy the envy of the planet.  Every year, many tens of thousands of ideas were germinated and generated here.  Making all our lives – and our economy – better and better.

President Abraham Lincoln once noted the symmetry – and the resulting rampant success:

“Lincoln called the introduction of patent laws one of the three most important developments ‘in the world’s history,’ along with the discovery of America and the perfection of printing.”

But of course our government couldn’t always and forever leave it alone.  Because there were crony Intellectual Property (IP) thieves bribing the heck out of them to not leave it alone.

US inventors and their inventions had helped create an economy so successful – it has spun off many, many titanically huge companies.  Many of which have decided it is better to bribe government to undermine IP than it is to pay inventors to use their IP.

And in 2012, our amoral government began doing its crony-dirty-work – to undo our patent system.

“The new law significantly changes many facets of U.S. patent law, chief among them being the adoption of a first-to-file scheme to replace the centuries-old first-to-invent system and the implementation of an opposition-like post-grant review.”

Both of these ideas – are exceedingly awful.  “First-to-file” absolutely is awful:

“(T)hese new rules effectively create ‘a race to the Patent Office’ and potentially increase the number of references that can preclude patentability for your claimed invention….

“In the age of the internet and with a more global economy than ever, that’s a lot of potential for invalidating disclosures.  Such disclosures can preclude patentability even if the disclosure was made by the inventors themselves.”

What does this mean?  Big Business IP thieves can sit back and do nothing to contribute to inventors and their inventions.  But instead unleash their armada of attorneys to file for patents on these inventions – doing so MUCH faster than the often much-less-capitalized inventors themselves.  See?  They weren’t first-to-invent – because they didn’t invent anything.  But they were first-to-file – so they get the patents.

The other awful idea?  If you manage to successfully run the “first-to-file” gauntlet and get a patent?  The “opposition-like post-grant review” – embodied in the Patent Trial and Appeal Board (PTAB) – will likely take it away.  Which is REALLY exceedingly awful.

“Even the anti-patent people – admit PTAB is destroying patents. They have no compunction with this admission – because they in fact want to destroy patents….

“‘The (United States Patent and Trademark Office) USPTO is no longer so friendly towards software patents. In fact, many such patents that have been granted are nowadays being invalidated.…The judges at PTAB…continue to nuke software patents.’

“This is the USPTO saying ‘Congratulations, you have a patent.’ And then saying ‘Psyche. We were just kidding.’”

And government – is going to government.  Which means the biggest crony donors always win.

“‘If you like to steal other inventors’ stuff, then you must love PTAB,’ said Paul Morinville, managing director of U.S. Inventor Inc., an organization advocating for stronger patent protections for startups.

“Since its creation by Congress in 2012, the board has angered the inventing community, which says the review process is biased.

“One judge…represented Apple Inc. in private practice and then ruled in favor of the tech giant 17 times after joining the court….

“Mr. Morinville estimates that the review board has invalidated patents in 92 percent of the cases it has resolved.

“Eyebrows were raised this summer when a lawyer representing the patent office in a federal court appeal of a board decision acknowledged that the agency had added extra judges to reviews in order to achieve the desired outcome. The patent office attorney said the move was necessary to ‘ensure the [director’s] policy positions are being enforced.’”

And government – is going to government.  Which means make many, MANY egregious mistakes.

Not satisfied with its awful 2013 law, Congress committed another direct assault on patents: The 2015 Protecting American Talent and Entrepreneurship Act (PATENT Act) – and most damagingly its Section 101:

“Section 101 of the U.S. Patent Act controls what types of inventions are eligible for patent protection in the United States.

EXACTLY what we need: Even more unclarity.

What’s Eligible for a Patent? The Section 101 Muddle

Section 101: A Basic, But Troubling Statute in Patent Law

Patent Eligibility Under Section 101: Has the United States ‘TRIPPED’ Up?

Should Section 101 of the Patent Act be Removed?:

Yes, it should. So too should the America Invents Act.

The massive IP mess Congress has made – is being noticed and noted by some judges trying to sort out the nonsense cases they’re being handed over and over again.  Even while many of their judicial colleagues further add to the mess.

“Judge Kimberly Moore filed a scathing dissent in which she said the majority opinion ‘deeply trouble[s]’ her….

“Section 101 simply should not be this sweeping and this manipulatable. It should not be used to invalidate claims under standards identical to those clearly articulated in other statutory sections, but not argued by the parties….

“‘It should not convert traditional questions of fact (like undue experimentation) into legal ones. The majority’s validity goulash is troubling and inconsistent with the patent statute and precedent.

Yes, indeed it is absurd.

We’re Left to Clean up the Supreme Court’s Messes

Why America’s New Patent System is Both Destructive and Unconstitutional

How’s it going for the US economy?

America Invents Act Cost the US Economy Over $1 Trillion

That’s from 2015 – less than three years into the new, awful IP regime.

Our Lack of Patent Protection is Destroying America’s Future Economy

Congress made this mess.  Many judges and Justices could have provided clarity – but have instead added to this mess.

Which leaves us with but a few voice-of-reason magistrates calling for reform of this legislative and judicial morass.

McMorris Rodgers Has the Right Idea on Big…

Our Thoughtless Globalism Has Proven to Be an…