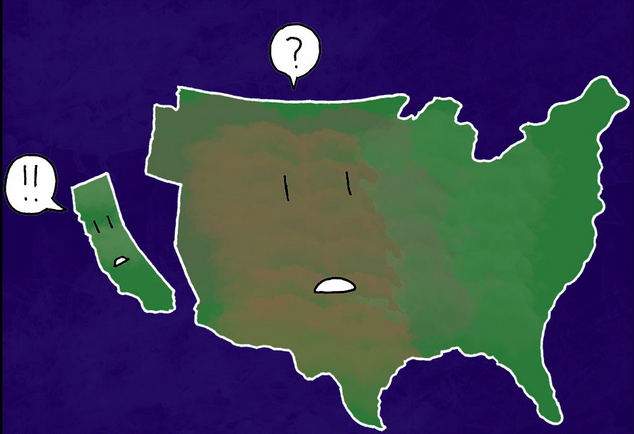 As terrible as California is – it is huge in its awfulness.  Its still-massive economy makes the Golden State all by itself a stand-alone country.  Unfortunately for everyone, it’s a Third World country.

California Is Now a Third-World Country

Big Tech Got $3 Trillion Bigger During the Pandemic

Combine that with a massive, largely-illegally-imported underclass?  And you’ve got a Third World country right here on our Left Coast.

“California has been, for many years, a top destination for immigrants, both legal and illegal. Today, California has more immigrants than any other state, largely in part due to the addition of a whopping and electorally significant 2.4 million immigrants during the 1990s. As California was flooded with immigrants, the state shifted left, with newly imported populations heavily favoring the Democratic Party.”

Mass Immigration and the Decline of California:

“The ‘California economy’ is Silicon Valley and Hollywood. That’s it….

“We have the second highest poverty rate in the US above only Mississippi if you figure in housing costs. Housing is not affordable. Even rents are not affordable. College used to be almost free in this state. Now it will cost $50-100,000 just to go to college. There’s serious overcrowding everywhere. There are ghettos, barrios and other assorted s**tholes along with lots of poverty and gangs everywhere you turn around. None of this was going on before.”

But as we have previously noted, GDP is irrelevant – GDP per capita is highly relevant:

“California is net poorer – despite the increase in GDP.

“‘Per capita gross domestic product (GDP) is a metric that breaks down a country’s economic output per person and is calculated by dividing the GDP of a country by its population.’

“California adding millions of poorly educated Third World immigrants has increased its GDP – but greatly retarded its GDP per capita. And thus its economy.”

California has a tiny upper-crust minority of uber-rich Tech and Hollywood moguls – and a vast majority of very poor people.  How very Third World of them.  Which leads to Third World government policies like this….

“The state’s progressive tax structure is reaping billions from the wealthiest to fund the state’s safety net. But it also reveals how the pandemic has widened the economic gulf for millions of Californians — more than the rest of the country.

“Were his budget proposal approved by lawmakers as is, the state would spend an unprecedented amount to fend off poverty, eviction and K-12 education loss for California’s most vulnerable residents in the 2021-22 fiscal year. And that would be funded, in part, by unparalleled tax revenues from the soaring income growth and stock market gains that the richest Californians enjoyed this year.”

I can’t imagine why….

As we have seen – here and all around the world – the Third World is not where you should look for government policies to emulate.

California has for years been an unmitigated governmental disaster.

Getting it down to 75 must have been a Herculean editorial effort.

California’s Vanished Dream, by the Numbers

California: The State of Corruption:

The dirty-little-Party-politics secret – goes back many years.  Because years-worth of single-Party rule – is never a very good idea.

The Corruption Problem with California Democrats

Corrupt, one-party rule is the hallmark of the Third World.  And it rarely means good governance.  Uni-party elections have consequences.…

All of this is to say: California is NOT where you want national policy being made.

Except: That’s just what the Joe Biden Administration is doing.

And before we were afflicted with the Joe Biden Administration?  Inert DC was for years doing the exact same thing.

Our Do Nothing Congress – Means Do-Too-Much California Is Making National Law:

“(D)espite the titanically stupid way California got there – their massive (and otherwise irrelevant) GDP does hold a lot of sway in national policy making….

“Every company that has to deal with California’s government – has to create a special cadre of internal practices just for California’s much-too-much government.  Which is a giant pain in the posterior for these companies.”

And some things are actually – per the Constitution – the federal government’s job.  Which means a state like California shouldn’t be doing them at all:

“‘[The Congress shall have Power] To regulate Commerce with foreign Nations, and among the several States, and with the Indian Tribes….’

“‘The World Wide Web – is a WORLD Wide Web. So its policymaking – is very obviously the responsibility of the federal government.’”

But DC dithers – while California burns US to the ground.  The US Congress has never passed a Net Neutrality law.  Which should stop California – but, of course, it doesn’t….

Well, the courts are where We the Sane are supposed to go for relief when the other government officials are setting alight the Constitution.

Except, of course, the courts are contributing to the conflagration.

“After ISP lobby groups’ motion for a preliminary injunction was denied last year in US District Court for the Eastern District of California, they appealed to the US Court of Appeals for the Ninth Circuit. A three-judge panel unanimously upheld the ruling against the broadband industry in January, after which the industry groups petitioned for a rehearing with all of the appellate court’s judges (called an “en banc” hearing).

“The answer came back Wednesday: No judges on the appeals court thought the broadband industry’s petition for a rehearing was even worth voting on.”

So now, thanks to courts, California’s idiotic Net Neutrality policy – will be de facto national policy.  Which ain’t great.

Then you haven’t been paying any attention at all to California’s decades of ever-increasing, government-induced decrepitude.

We shouldn’t be emulating – or deferring to – Third World governments.

Globalists’ Response Is Always FAR Worse Than the…

Sinema and Manchin: Democrats Are So Awful –…