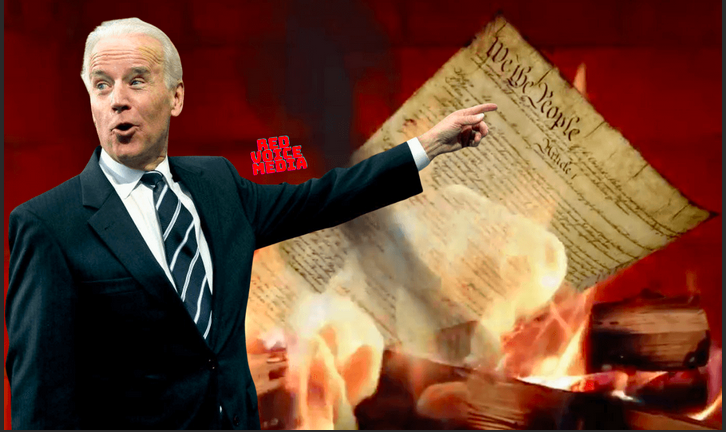 What Rulings?  Dems Are Yet Again Ignoring the Court and the Constitution

During the 2009 push to jam US with Obamacare’s individual mandate, perpetual Democrat House Speaker Nancy Pelosi was asked…:

“Where specifically does the Constitution grant Congress the authority to enact an individual health insurance mandate?”

To which the Speaker snidely replied….:

Pelosi’s dismissive response clearly demonstrated that the first time the Constitution had entered her mind during the entirety of the Obamacare process – was when that person asked her that question.

Which is more than a mite problematic from a politician who took an oath to: “Support and defend the Constitution of the United States against all enemies, foreign and domestic; (and) that I will bear true faith and allegiance to the same….”

The Supreme Court adhering to the Constitution has long roiled Democrats into foam-flecked frenzies.

We’ve recently seen a Democrat engage in a murderous threat of a Justice he doesn’t like – and his family.

We’ve seen many Democrats engage in attempted terrorist intimidation of Justices they don’t like – by illegally gathering en masse outside the Justices’ homes.  Actions no Democrat will condemn – or prosecute.  Heck, Democrats have repeatedly praised it.

We’ve seen many recent Democrat demands to pack the Court with many additional Democrat Justices – to permanently ensconce an unconstitutional ideological majority.  It’s not their first time thinking to do so.  Democrat President Franklin Delano Roosevelt considered packing the Court back in the 1930s.

And when Democrats aren’t looking to terrorize or overpopulate the Court – they’re simply ignoring it.

In 1832, Democrat President Andrew Jackson famously said of a Court ruling he didn’t like – and to which he didn’t intend to adhere:

“The Supreme Court has made its decision, now let them enforce it.”

“What these two rulings (Dobbs and EPA) do – is take power back from unelected bureaucrats and return it to We the People.

“The Constitutional concept is: Our representative, republican government means we get to vote for people who vote on things that affect us.  That’s the Legislative Branch – Congress.

“Which means unelected judges (Judicial – Roe) and unelected bureaucrats (Executive – EPA) can’t make those decisions for us.  Because that’s tyranny.”

The EPA ruling was quite clear: If you want the Executive Branch to do something – the Legislative Branch must first expressly empower it to do so:

“‘Supreme Court Decision Likely To Limit Reach Of FCC And Other Federal Agencies:

“‘The case before the Supreme Court dealt with the environment, but the outcome has muddied the potential reach of all government agencies – including the Federal Communications Commission and the Federal Trade Commission.

“‘Clear congressional authorization’ means about legislation – what the late Justice Antonin Scalia meant about the Constitution:

“‘The Constitution is not a living organism.  It’s a legal document, and it says what it says and doesn’t say what it doesn’t say.’

“Speaking of the FCC: There is perhaps no more clear cut example of bureaucrat overreach –   than our decade-plus dance with the idiotic policy that is Net Neutrality.

“Congress has NEVER passed a piece of legislation that contains the phrase – or the concept of – Net Neutrality.

Do Democrats care at all about the Constitution and its division and balance of powers?  Heck no – I mean, why start now?

Supreme Court Ruling Returns Power to Congress Where It Belongs

So Democrats are exhuming Andrew Jackson’s unconstitutional approach – and are simply going to ignore the Court and the Constitution.

“If the Senate will not act to address climate change and boost clean energy, ‘I will take strong executive action to meet this moment,’ Biden said in a statement….”

Ummm…that’s PRECISELY what the Court JUST said you CAN’T do, Mister President.

Federal Agencies Lay the Groundwork to Ignore the Supreme Court

Democrats aplenty are pretending the Court ruling doesn’t say – WHAT IT CLEARLY SAYS….

Feeling Defeated by the Supreme Court’s EPA Ruling? There’s Still a Lot We Can Do

There is a lot you can do.  It’s called having Congress pass laws.

Can EPA Ruling Zap Net Neutrality? Not Everyone Agrees

Does SCOTUS EPA Case Impact Net Neutrality? Here’s Why I Say No

As is nigh always the case, my brief flash of happiness after the Court’s recent decisions – turns out to be utterly unwarranted.

The Court rulings to rein in DC and its Democrats – turn out to not matter.

Because the Court – and the Constitution – don’t matter to Democrats.

My Email Exchange With a Big Tech Company’s…